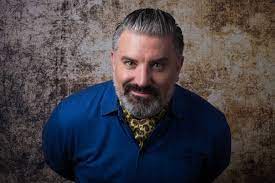 His “tour de force” (Leicester Mercury) performances have earned him a win for Best International Guest at the 2016 New Zealand Comedy Awards, followed by a sell out run in 2017 which saw him nominated for the same award again. He's performed at sellout shows at the Edinburgh Fringe, Adelaide Fringe, Melbourne Comedy Festival and the New Zealand Comedy Festival. An extremely in demand writer, Rich Wilson has also contributed on shows for BBC Three, Sky Arts and Channel 4.

Rich is also the host of the wildly popular insane in the: podcast series; currently featuring Men Brain, Fem Brain and soon for your aural pleasure, Them Brain! Rich talks to funny and interesting people about their experiences with mental health. In the last year the podcast has been nominated for an award with Podbible and in 2019 won an award with JOE for best podcast with the likes of; Guilty Feminist, Off Menu and Films To Be Buried With.