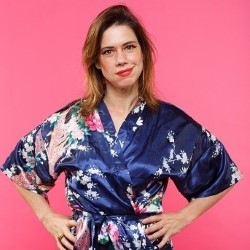 We can not wait to get the talented Lou Sanders with us nect April at The Venue.

Lou Sanders is one of the most original comedians in Britain. She is the current reigning champion of the last series of Taskmaster (DAVE) and other recent television appearances include QI (BBC2), 8 Out of 10 Cats Does Countdown (Channel 4), Hypothetical (DAVE), Aisling Bea’s sitcom This Way Up (C4), The Russell Howard Hour (Sky 1), Jon Richardson’s Ultimate Worrier (DAVE) and Karl Pilkington’s sitcom Sick of It (Sky One).

A widely acclaimed stand-up, Lou had a breakthrough year with her live show Shame Pig, which received rave reviews and added extra shows at both the Edinburgh Fringe and at London’s Soho Theatre where it ended up selling out three separate runs. The show subsequently went on national tour in the UK and internationally and was named a top show to see by publications including The Guardian, The Scotsman, The List, The Mirror, The Daily Express, The Evening Standard and Edinburgh Festivals Magazine, and also won the Comedian’s Choice Award and Edinburgh Poster Award. In 2019 Lou returned to the Edinburgh Fringe with her new show Say Hello To Your New Step-Mummy which again was critically-acclaimed, completely sold out and added multiple extra shows and will tour the UK and US in 2019/20.

She has performed internationally including performances on Comedy Up Late from the Melbourne Comedy Festival (ABC1) and the New Zealand Comedy Gala 2017 (TV3) and supported Katherine Ryan on her latest West End run at the Garrick Theatre, as well as at the recording of her Netflix special at the Hammersmith Apollo.

Lou’s other television appearances include Stand Up for Comedy Central (Comedy Central), Alan Davies’ As Yet Untitled (DAVE), Russell Howard’s Good News (BBC3), 8 Out of 10 Cats (E4), Stand Up for Wales (BBC Wales), a live stand-up set on Comic Relief (BBC1) and Live at the Electric (BBC3). Her radio work includes regular appearances on Radio 4’s The Unbelievable Truth, co-presenter of The Richard Herring Show with Lou Sanders (FUBAR Radio) as well as being a stand-in co-presenter for the Geoff Lloyd Drive Time Show (Absolute Radio).

As a writer, Lou wrote and starred in the short film Elderflower which co-starred Sheila Reid (Benidorm), Tom Rosenthal (Friday Night Dinner) and Mike Wozniak (Man Down). She has also written for 8 Out of 10 Cats (Channel 4), Mock the Week (BBC2), Stand up for the Week (Channel 4) and Miranda Hart, and was recently awarded funding to write a feature film.